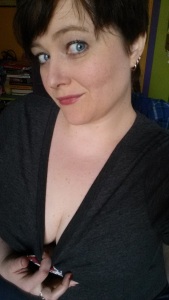 It’s the anniversary of my breast reduction surgery! Hooray!

Break out the party hats and the balloons because it was 15 years ago today that I went under the knife and changed my life. My surgery scars are now eligible for their learner’s permit.

This year to celebrate, I’m going to tell you all a pre-surgery story.

My breast reduction was scheduled for eight in the morning, so I had to be there at six. My friend Gin had graciously volunteered to come out and take care of me, getting me to the hospital, hanging out with me there, taking me home, and minding me for a few days afterward. When we got to the hospital, we were met by my friend (and co-worker at the time) Josh.

I got checked in and settled into my room. Gin and Josh kept me company until it was time to go under the knife. When the nice nun came in to ask if I’d like to pray before surgery, I politely declined, thanking her anyway. There may have been a comment made after she left that the nice nun praying for me would have been pointless as I make angels cry.

I can’t remember where Gin had gone to, but when the nurse came in to insert my IV, only Josh was with me. Now, I’m not afraid of needles. Naturally, I’d prefer not to be punctured by them, but for me, they’re no big deal. Josh, on the other hand, didn’t like needles. At all. Period. But, Josh is a sport and he wanted to be supportive. So while this nurse tried to insert my IV, Josh held my other hand.

And he also held the hospital menu in front of his face so he wouldn’t actually have to see the nurse trying to establish my IV.

Which felt like it took forever because she said she couldn’t find a vein. And I’m looking at this poor nurse like, “Lady, I’m so white I’m practically see-through. What do you mean you can’t find a vein?” while Josh is looking at this menu like, “Oh, they have cottage cheese. How interesting.” And despite this woman digging around in my arm with a needle trying to strike oil, which stings quite a bit, I’m trying desperately not to laugh at the absolute absurdity of this situation and make it all worse. Because if I started laughing, that poor lady was never going to get that IV done.

Some people feel apprehensive about having surgery. No matter if it’s elective or necessary, life-threatening or minor, anesthesia will be administered, incisions will be made, blood will be lost, and the chance of death will linger. Others feel excited. Whatever had been burdening them is going to be fixed. They’re going to go to sleep sick and wake up better.

I, on the other hand, felt totally calm. Not really apprehensive. Not excited. Just zen and ready.

The comfort of knowing there’s cottage cheese on the hospital menu is clearly underrated.

Warning! This post contains graphic details of my breast reduction surgery. It’s not for everyone and probably shouldn’t be read while eating anything. Proceed with caution.

In August, I wrote about my breast reduction surgery and here I am talking about my boobs again, this time about the negative aspects of my ta-tas.

Negative, you say? How can there be anything bad about boobies?

Well, there can be, and I’ll get to that. But first, I’m going to tell you why I have no trouble talking about my boobs.

When your boobs are as large as mine were, they sort of take on a life of their own. They become their own entity. My chest was large enough that it would knock things over. I’d unintentionally hit people with my boobs because, well, how could I not? They were between me and whatever I was doing. Reaching past someone guaranteed they were going to get some titty on them. Working in close quarters, an elbow to or a hand brushing a boob was common. My friends quickly got used to it.

I imagine that they thought what they saw in the bra was what they’d get outside of it. Little did they realize…

The stretchmarks didn’t go away with my surgery, though with the smaller breasts I can at least be relatively sure that I won’t be getting more of them.

However, the smaller breasts came with a price of their own: scars.

I went into this surgery knowing that there would be scars. I don’t heal quickly and I don’t heal well. Chalk it up to the fair skin or genetics or whatever. It’s been that way since I was a kid. Considering the incision went from under my armpit, around my breast, and ended about half an inch from my breast bone, yeah, there was going to be a scar. It’s widest under my arms where the drain was implanted for my first week of recovery, but for the most part the whole thing has faded.

Due to the size of my breasts, I had to have what’s called a free nipple graft, which made for another incision scar. The surgeon cut up from the bottom of my breast and around my nipple. My nipples were then removed completely so the breast tissue could be removed and the remainder fung shui’d into a more functional and appealing fashion. My nipples were then reattached. The incision scars from this part of the operation have faded some as well.

Now, the risk of doing a free nipple graft is that the surgeon is taking off and then reattaching the nipple, meaning that if the nipple doesn’t get adequate blood supply, the whole thing could die and have to come off. I knew that going in and sure enough, it was a complication I had to deal with.

Before visions of a nippleless boob start bouncing in your head, let me assure you that wasn’t my case. I have both of my nipples, thank you. However, my left one didn’t get quite enough blood supply and the top layer of skin died and sloughed off. To me, it looks like long healed skin after a bad burn, that mottled pink and white, something-significant-happened-here skin. I have been reassured that it doesn’t look that bad, but no one can deny that it’s not a normal look.

My right nipple is fine and looks quite fetching, except for the tiny scar at the top where it pulled away from the skin a little after the stitches were removed.

With all of the scars and stretchmarks, my breasts have a kind of patchwork quality to them. I call them Frankenboobies as they were put together by man. And as glad as I am to have them and have them be this smaller, much more manageable size, I admit that I’m self-conscious about their appearance in the flesh, so to speak.

However, properly displayed in the right bra and shirt combo, they are fantastic and I have no trouble telling people that, too.