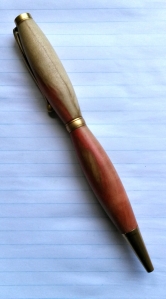 The lovely Trinae Ross, who has a blog called Writing While Wearing a Straightjacket, tagged me to write a blog post about what has shaped my writing (you can read her post on it here). I will eventually tag someone else to do this, but first, my words on the subject.

I wrote my first word at three, my first story at six. From the time I was little, I was always coming up with stories and plays. I once wrote and produced a radio play using the kids in my mother’s daycare and the neighborhood, recording our voices on a blank tape on a radio. It was a murder mystery. I even attempted a retelling of Sleeping Beauty using nothing but pictures I’d taken on one of my little cameras. This was in the days of film, kids. I had no idea how good it was until my mom finally got that roll developed.

Storytelling has always been a part of my existence, a thing so ingrained in me that it might as well just be another chromosome. Even if I didn’t write them all down, I was still telling them, either to others or to myself.

So, what has shaped my writing?

I gave this question a good long think and I came up with three things.

1.) Fanfiction. I wrote mounds of it for several years, from the ages of about 18 to 21. The nature of fanfiction at the time and where I was posting it allowed for instant feedback on what was working and what wasn’t. It also taught me the very valuable lesson of writing for myself first.

I tell this story a lot because even after all these years later, it still resonates. One of my most popular stories started as a one off. It was just supposed to be that one little thing. But people begged for more and so I gave in and wrote a much longer story. It was a soap opera romantic thing and everyone loved it. Meanwhile, I HATED writing that story. HATED IT. I had never been so happy to finish anything in all of my life and I don’t think I’ve ever received a louder applause for anything I’ve ever written since. But that applause was so empty because I hated the story so much. That was when I recognized the importance of writing for myself first. And if other people read it and enjoy it, then that’s the bonus.

Another great lesson fanfiction taught me was that not all stories need happy endings, but EVERY story must have a SATISFYING ending. The readers will disagree, but the writers will know.

2.) NaNoWriMo. NaNo taught me the discipline to write every day. It taught me that I could complete a novel-length work of fiction. It taught me how to write by the seat of my pants, how to meticulously outline, and how to find a happy place somewhere between the two. It taught me that first drafts are supposed to be garbage and that the real magic happens in the revisions. It taught me everything I needed to know about how I operate as a writer, my habits and my weakness and my strengths. Basically, NaNo taught me about the nitty-gritty heavy-lifting that gets glossed over a lot in favor of inspiration and muses.

3.) Stephen King’s advice. On Writing has been a brilliant guide for me and I’ve waxed poetic about that book before. But I’m going to focus on one particular bit of Uncle Stevie’s advice here: Read a lot and write a lot.

I am notoriously awful at reading for a writer. I know I don’t read enough and I struggle to read more. My only comfort is that when I do read (and I try to be consistent about it even when it’s often interrupted and I’m very slow), I try to get as much out of it as I can. In addition to reading for pleasure and enjoying the story (or trying to, depending on the book), I try to read with a critical eye and learn from other writers, particularly in my areas of weakness. If someone effectively describes something or transmits an emotion or has a clever way of conveying some idea, I take note of that and try to put it to use in my own work. Sometimes I’m successful, sometimes I’m not. But I’m always looking to learn.

I do write a lot and I think it’s been the writing a lot that has done the most to shape my writing. It’s helped me find my voice and my style. It’s allowed me to build my confidence. With millions of words written over the course of my writing career (remember, I started this in earnest back in 2007), I can actually look back and see my growth. I can see where I failed. I can see where I improved. I can see where I still need more work and development. I couldn’t have done any of that if I hadn’t put the words down somewhere.

I think there are probably other things that have shaped my writing. I think just about everything in my existence could be said to shape my writing, for better or worse. But I think these are three things that had the biggest impacts.

And I think they’ve all been for the better.

I wrote fanfiction for years. By the time it was all said and done, I’d written easily over 100 stories in twelve fandoms (that I remember). It’s very easy for most people to dismiss fanfiction (if you ignore the people that reconstituted their fanfic into bestsellers and you’re not one of the authors that likes to sue fanfic writers), but I cannot deny the contribution it made to my writing.

I’ve read some of my old stuff before, by now over ten years old in some cases, and I cringe. It’s filled with a voice so passive it doesn’t have a pulse. The descriptions are like vacant lots. Some of the stories are downright drivel (those, oddly enough, tended to be my most popular ones). None of them do I read and go, “Yeah! I can redo that and sell it!” because, yeah, no.

However, they’re not at all a waste. From the very first story, it was obvious that I had a good ear for dialogue. The quality of the stories improved over time. I was pretty good with tone and pacing. I was very good at picking up the canon and the characters. That’s something I pride myself on to this day. I was once able to write a good, in canon story in a fandom for a movie I’d never seen. My friend just told me the details I needed to know. The feedback praised my ability to write the main character so well. I still preen over that little victory.

Because I was at one time pumping out several stories a month, it was like a writing bootcamp in a way. Just by the sheer volume of words I was writing, I had no choice but to get better. Stephen King said that to be a writer you had to read a lot and write a lot and at that time, I was writing A LOT. It wasn’t all good, but it was something. And the something I was getting down helped me get better whether I realized it or not.

Now, I didn’t learn everything writing fanfiction. It wasn’t until well after my constant gush of words trickled to a drip of a story every once in a while that I learned the art of revisions. It was about then that I really got the hang of my passive voice problem. It’s been the years since then that I really refined my writing process into something that almost works well.

But, I can’t help but think how far behind I’d be if I hadn’t been writing all of those stories. Fanfiction gave me an opportunity to get better with immediate feedback and the a safe place to explore, experiment, and most importantly, write.

So, feel free to write fanfiction off.

Because I’m happy I wrote it.