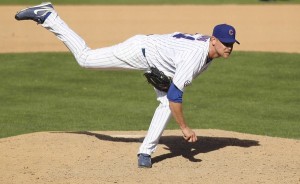 After a few days of thinking about it, I feel like I can put my feelings and thoughts into a coherent form without it sounding like nothing but sappy, saccharine drivel. Nothing screws up my Friday like finding out one of my boys is retiring.

Really, the only thing Kerry Wood and I have in common is the number of times we’ve ended up on the DL.

But it still feels like we’ve grown up together in a sense, which is a stupid thought, but the only way I can explain it without mucking up the works. So his retirement strikes a chord with me. Just a couple of weeks before, at Casino Night, I told Harry that Kerry Wood was my guy. That so long as he played, then I wasn’t old. That night, just a couple of day or two after he chucked his glove into the stands after a frustrating outing, he was one of the last players to leave Casino Night, talking and taking pictures, a smile on his face. It was encouraging to me that despite the struggles he was having this season, he was still smiling.

Now maybe I know why.

As much as it saddens me to see Kerry Wood retire, his final appearance on the mound couldn’t have been happened any better. Ending his career as it began, with a strikeout, was beautiful. His son Justin running from the dugout to hug him as he left the mound brought tears to my eyes. His press conference the next day, all of his thank you’s, was another example of class (I got the tears again when he thanked Lester Strode because Lester is so often overlooked). I’d always hoped that when Kerry Wood left (and therefore left me to be officially old in baseball years) that it would be on a high note.

Really, I don’t think this note could have been any higher.

I wrote last week that Kerry Wood was veteran and a pro and that he would find a way to help his team. When I wrote that, I wasn’t thinking about retirement. But I guess he was. I guess this was the way he felt he could help them best.

I’ll miss you in pinstripes, Kerry. But I’m glad you’re a Cubs lifer.

I guess that’s one more thing we’ve got in common.