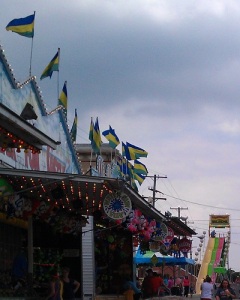 When I was in junior high, 7th or 8th grade, a new tradition began in my little town in the middle of the cornfield and it was called MayDays. Now you have to understand how exciting this was to the kids my age because back then we didn’t have much in the way to do around town. Our movie theater had collapsed, our drive-in movie theater had blown away, and our underage clubs didn’t have much staying power.

MayDays was going to be set up on the Square and on the streets and parking lots just north of it. There would be a carnival with rides and games and food. There would be vendors and bands and contest and sports competitions and a MayDays Queen pageant and such. The junior high at the time was north of the square and I remember walking past all of that stuff being set up on my way to school. Tantalizing and exciting. Living four blocks away from the fun guaranteed that I was up there every day if possible.

The rides were my main thing when I was a kid. They had the usual sort of stuff: ferris wheel, The Octopus, bumper cars, The Pharaoh, merry-go-round, giant slide, haunted house, The Scrambler, and the rides that challenged your ability to keep down your funnel cake like The Zipper, The Gravitron, and The Stormtrooper. The idea that I could just walk uptown to make myself dizzy was fabulous.

The big thing back in the day, aside from the rides, was playing this one carnival game in order to win beta fish. The fish usually died after a couple of days as carnival fish tend to have rough lives, but my sister won a beta that we had for over four years. His name was Herman and he liked to be pet. He was kind of a weirdo. 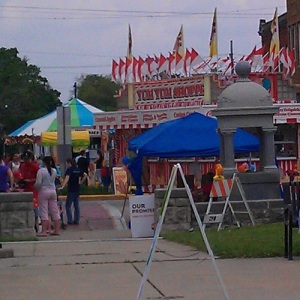 Over the years, MayDays has kinda died out. There’s still bands and the pageant, still a carnival and food, still some competitions and fundraisers, and this year there’s pro wrestling, but it’s shrunk over the years. Not as many rides or games or vendors.  The crowd has gotten smaller from when I was in school and it was almost impossible to walk around.

I still go up for my lemon shake-up and to have a look around, but I don’t linger long and I usually only go up one day. I don’t ride the rides anymore and stick around for any of the entertainment.

I can’t help but notice when I’m up there, though, that the kids are still having a great time, running from ride to ride, sticky with funnel cake and drunk on lemon shake-ups, trying to win those elusive grand prizes and getting stuck with a half-dead fish.

At least the core audience is still loyal.