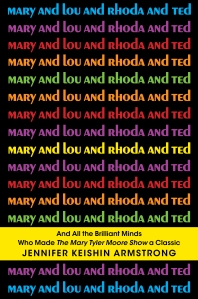 My chronic rerun habit paid off in a big way when I won a Me-TV contest. The prize was Jennifer Keishin Armstrong’s book, Mary and Lou and Rhoda and Ted: And All the Brilliant Minds Who Made The Mary Tyler Moore Show a Classic. I didn’t check the winner’s list so I was completely unaware that I’d won until a package from the publisher showed up. My confusion (“I didn’t order a book from these people”) gave way to pure joy as soon as I saw what book was in the package (“HOLY CROW I WON I WON I WON!”)

And indeed, I was the winner.

I’m one of those people that’s fascinated with behind-the-scenes stuff about TV shows, any sorts of TV trivia, even if I don’t watch or like the show (I’m the same way with movie trivia, which is more absurd given that I don’t really watch many movies). It’s not necessarily the dirt I’m into. Who’s sleeping with who, who’s fighting with who doesn’t intrigue me quite as much as how something was made.

This book is that and more.

Not only does it give you insight into the show itself, but it goes above and beyond in recognizing that the show didn’t occur in a vacuum and the people involved didn’t pop into existence just for the purpose of the show. While the show is the main focus, of course, it also talks about the TV landscape at the time, some of the other shows on the air, the spin-offs, and a bit about the state of the country in relation to the show, how the show impacted the country and the country impacted the show.

It also goes beyond just the actors, those lovely faces we see and associate more readily with the show. It profiles the creators and their mission to make a realistic sitcom featuring a working, single woman and their dedication to their vision. It also shows how they broke the rules by looking for and hiring women writers in a time when women weren’t thought of as funny. And, naturally, talks about the women who wrote for the show.  There’s even a bit about one of the show’s most dedicated fans.

The show broke more ground than a lot of people might realize.

It was actually a really inspiring read, in a way. The idea of working in this environment of a people that were dedicated to making this the best show that they could, who wouldn’t compromise or settle for less. It wasn’t all hearts and flowers, but it was special and it makes me wish I could be apart of something just like that.

This is also the kind of book I wish I could write about my TV show loves. Jennifer Keishin Armstrong’s narrative isn’t some dry account, by the numbers and letters of what happened. She allows the people she’s writing about to be the real people they are and brings out the emotions of the time. I cringed while reading about the first rehearsal that went so badly and I teared up during the recounting of the final episode. Every bit of it is readable, approachable, and educational without feeling like you’re being lectured to or otherwise schooled.

Now it’s time for my disclosure. The Mary Tyler Moore Show is one of those shows that half-ass watch, which means most of the time I’m not paying a whole lot of attention to it unless Rhoda or Murray are talking (they are my favorites and I have no shame about this). However, I KNOW it’s a good show and I’ve caught myself, over time, watching more of the episodes rather than just putting them on for background noise.

But this book has made me appreciate the show on a whole new level.