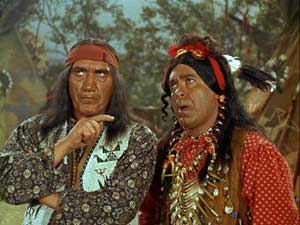 As I discussed in a previous post, all of your favorites are problematic. All of my favorites, too.

One problematic aspect of reruns that’s probably the most glaring is the racist casting. White actors playing non-white roles has been common place for decades and was probably at its most popular in the Westerns of the ’50s, ’60s, and early ’70s. That’s right. Those Native Americans were not actual Native Americans. Those Mexicans? If they had a speaking role, they were most likely not actually Mexican.

John Saxon played a Native American on Bonanza and a Mexican on Gunsmoke. Martin Landau played a Mexican on both The Rifleman and The Big Valley. Michael Ansara not only played a Mexican in a couple of episodes of Rawhide, but he was frequently cast as a Native American, including starring in his own short-lived series called Law of the Plainsman playing Deputy Marshal Sam Buckheart, a character he originally played on The Rifleman.

Sadly, one of my favorites, F-Troop, was notorious for casting white actors as their Hekawi tribe members. Frank DeKova, Don Diamond, Edward Everett Horton (who also played a Native American chief on an episode of Batman), J. Pat O’Malley, Jamie Farr, hell even Don Rickles all played Native Americans. It seemed comedic timing was more important than racial accuracy. Not that there aren’t funny Native Americans; but back then, they didn’t even bother to look for them.

Two of the most curious examples of racist casting I have ever seen happened on two of my favorite reruns, both of which I’ve mentioned before, but I’m going to mention again because they are worth mentioning at every opportunity.

In an episode of Hawaii Five-O called “Samurai”, Ricardo Montalban played a Japanese criminal. Yes, you read that correctly and aren’t you glad that you did. In the second oddest case of yellow face I’ve ever seen (we’ll get to the first one very soon), a very Mexican Ricardo Montalban had his eyes artificially slanted to play a Japanese man. Like, his accent didn’t change at all. And whatever they did to his eyes made him look less Japanese and more like an eye lift gone wrong. The entire effect is very disconcerting and I highly recommend you try to catch that episode because descriptions and pictures don’t do it any justice.

The truly oddest case of racist casting I’ve ever seen, however, belongs to the pilot episode of The Wild Wild West called “The Night of the Inferno”. In this episode Victor Buono played Juan Manolo aka Wing Fat.

Yes, let me break that down for you.

White actor Victor Buono played a Mexican man in disguise as a Chinese man. It’s basically a turducken of racist casting and I can’t help but gawk at it because I have no idea how to even begin to process it. I suppose if you’ve ever watched the series, then you can agree that at the very least, it sets you up nicely for some of the more bonzo episodes of the show.

Thankfully, this sort of whatthefuckery is largely in the past and though racist casting does still happen (whitewashing Asians and Pacific Islanders is still unnervingly common), the backlash is swift and loud. A new normal has been and is being established and even if I don’t watch current shows all that much, I’m still all for it.

After all, one day those shows will be reruns.