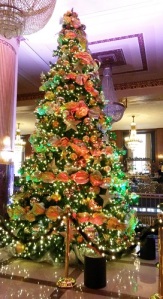 Ah, the end of the year. Finally.

Yes, it’s a been a long, struggle of a grind of a year and I’m glad to see it coming to a close. And since 2018 is wrapping up, so am I. I’m going to spend the last month of the year tying up some loose ends and plotting for 2019.

I’m going to schedule and ebook Season 3 of Murderville. Once that is done, all I’ll have to worry about is letting people know when the episodes go live. It’s going to be a huge relief knowing that it’s off my projects list. And since the first drafts of Season 4 and Season 5 are done, I’ll only have to worry about revising them. Maybe I’m finally getting the hang of this.

I’ve been wanting to put together a small flash fiction ebook, and I think that might be something I can do this month since I have most of the stories written and it shouldn’t take me too much time and effort to pull it off. A little fun thing that gives the illusion of productivity.

With 2019 looming, the other thing I need to do is look at my mess of a projects list and decide what I need to work on next year. This year was sort of a disaster, so I have plenty of things to work on. Which is sort of the reason why I’m not looking forward to figuring anything out. It’s going to be a drag.

In non-writing projects -or mild-writing projects, as it may be- I’m going to do some serious, actual work on a podcast. If you’ve listened to me ramble with Dan (he doesn’t ramble) during our chats about The Green Hornet on Eventually Supertrain, then you know I’ve teased about doing the Book ’em, Danno podcast about the original Hawaii Five-O. I’m going to attempt to make that tease a reality. I know what the basic show format will be. It’s just a matter of some research and recording. Simple, right?

Sure. Always simple in plan, not so much in execution, as we all know. We’ll see.

The year might be coming to a close, but the fun rages on. Murderville patrons already got an exclusive look at Season 3, but everyone can check it out on December 11th. Also, $2 patrons get their final bonus of 2018 on December 18th. Don’t miss out! Become a patron now!