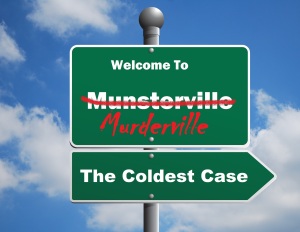 Christabelle stood outside Walley’s Cove wondering if this was how she’d spend her time if she ended up dating Rena on a regular basis, always waiting for her. When Pam called to tell her that Rena was open to seeing her again, Christabelle jumped at the chance to ask her to dinner. She felt like she needed another shot at impressing the woman after lunch getting derailed by Jerry Cooley. Pam had shamed Christabelle good for not knowing his story, but Christabelle had grown up and gone to school just outside of town; and her trips to Dillman’s were usually at the window. Her nosiness had also been confined to the what the living were doing currently, not so much what they’d done before she was born. The past didn’t concern her. She didn’t really have much interest in cold cases.

“I promise you I’m not usually late,” Rena swore, a little out of breath, as Christabelle opened the door for her. “Today has just been a day for last minute things.”

“It’s okay,” Christabelle said. “I’m used to waiting. It’s what I’m usually getting paid to do. Wait for a cheating husband to show up. Wait for him to kiss his mistress so I can snap a picture. Wait, wait, wait.”

“Is that what you’re most often hired to do? Follow cheating husbands?” Rena asked, sounding a little disappointed.

The hostess met them and escorted the two of them to a booth. Walley’s Cove was a typical seafood place. Decked out in blue and white with nautical everything, it was warm and cozy. Their booth ended up underneath some kind of ceramic fish that looked like it was jumping out of the wall, simultaneously quaint and gaudy.

The two of them sat and slipped out of their coats.

“I told you that private investigation isn’t very glamorous,” Christabelle said, picking up where they left off. “It’s a lot of sitting in my car at night and watching buildings. It’s really dull, actually.”

“Why do I have the feeling that you’re trying to put me off asking about it?” Rena said, smirking a little. “Making it out to be less than what it is.”

“Because you can’t believe that my job could possibly be so boring,” Christabelle said. “TV has corrupted you all. We’re not all Thomas Magnum or Jim Rockford or Frank Cannon.”

“See. You have to learn all the great TV private investigators before you can judge.”

Rena laughed and opened her menu.

The two of them fell into the same easy chat that they’d established when they first sat down to lunch. It was like they were picking up where they left off, which Christabelle was thrilled about. Now maybe the two of them could make a little progress and see if this might be worth pursuing.

“I feel like I’m putting a disclaimer on everything I do, but I’m going to throw out another one here,” Rena said, glancing up from her menu at Christabelle. “I’m going to pick up the check tonight because I’m about to order a whole bunch of food. I am starving.”

Rena hesitated. Her cheeks flushed with embarrassment when she realized what she’d just said.

“The second one. The second one,” she said with a nervous laugh. Christabelle thought it was cute. “Of course, I pick up checks. I was going to pick up the check tonight anyway because you were nice enough to buy lunch and this place was my suggestion. But, no, I normally don’t eat so much in one sitting. Like I said, I am starving.”

“Well, we didn’t have a very good lunch,” Christabelle said apologetically. “I ended up eating the rest of my burger when I got home.”

“Yeah, I forgot about mine in my car. It’s still in the passenger seat, probably frozen solid,” Rena said, making a face.

“You can always thaw it out and eat it later,” Christabelle said. “Trust me when I say that Dillman’s burgers are just as good leftover. Even when left to freeze in a car. Believe me. I know.”

“I will trust you on that. You haven’t steered me wrong about the food so far.”

Their waitress appeared, a pert young woman with big brown eyes and dark hair pulled up in pig tails. Christabelle ordered the shrimp tacos and a Coke. Rena got a seafood sampler appetizer, a bowl of Walley’s chowder, and the Surf ‘n’ Turf special which came with steak (Rena asked for medium rare), popcorn shrimp, a lobster tail, and hush puppies. It wasn’t the most that Christabelle had ever seen a woman order for a meal, but it was still more than she thought Rena could feasibly eat.

“We can share the appetizers,” Rena said, reading the look of doubt on Christabelle’s face. “But I’m craving calamari and you can only get it in the sampler. It’s a scam.”

“It’s worth it, though,” Christabelle said, thinking of that fried calamari, probably the best you could get in a landlocked state.

“Which is why I put up with ordering the whole sampler.”

“At least everything on the sampler is worth eating.”

They fell back into easy conversation once again, talking about Rena’s work for a change. Christabelle never thought much about what a librarian did, but it turned out that they did a lot. Rena did more than shelve books and send out letters about late returns. She was in charge of fundraising and ordering and reading programs and everything else.

“We are a little short-staffed right now,” Rena admitted with a shrug. “We just don’t have the money to hire anyone else at the moment. So, I take on the bulk of the work. It’s not fair to dump it on everyone else when they already have a ton to do.”

“It’s not exactly fair to you, either.”

“That’s what I think when I’m sitting in my car, freezing my ass off while waiting for Mr. Stick-Your-Dick-Elsewhere to show up.”

Rena laughed loudly as the waitress arrived at their table with her tray loaded with appetizers and their drinks. She laid it all out for them, asking the customary questions of whether or not it all looked good and if they needed anything else. As soon as she turned to leave, Rena snatched a mozzarella stick from the plate, dunked it in marinara, and took a healthy bite.

“Oh. Hot,” she said around the boiling cheese in her mouth.

Christabelle laughed and shook her head. “You are hungry, aren’t you?”

“I told you so.” Rena nudge the mozzarella sticks closer to Christabelle. “Here. Help yourself.”

“And burn my mouth? No, thanks.” She instead grabbed a pita chip and scooped some of the spinach artichoke dip. It wasn’t nearly as hot as the cheese stick that Rena barely swallowed.

“So,” Rena said, grabbing a piece of friend calamari, the rest of her mozzarella stick left on a plate to cool. “How was work today?”

She grinned as she asked it and Christabelle couldn’t help but grin back. There was something infectious about the woman, more like giggles and less like the flu.

“The only thing I had to do today was meet with a couple of clients this morning,” Christabelle said. “Winter is kind of dead for me until Valentine’s Day when everyone wants to know whether or not their other half is cheating so they know if they should buy a gift.”

“The couple that I met this morning, though, is asking me to investigate their neighbors,” she continued, grabbing her own bite of calamari. “They believe that they’re involved with drugs, like selling them, but they don’t want to go to the police about it until they have some kind of evidence.”

“Looks it, too,” Christabelle said, thinking about the dark glasses and furtive looks.

“You don’t mind taking a job like that?” Rena asked.

“So long as the check clears. It’ll probably end up being nothing, but at least the clients will leave their neighbors alone.” Christabelle finally gave in and took a mozzarella stick. She broke it in half and left on her plate to cool for a minute. “How was your day?”

Rena giggled. “Slow this afternoon, thankfully. I got all of my work done in a couple of hours.”

“Oh yeah? Is that how the library business goes?”

“Some days,” Rena said with a shrug. “Even short-staffed we have those slow days where we get all caught up and then have nothing to do.”

“So, what do you do to entertain yourself on those days?”

Rena laughed nervously and looked at the remaining mozzarella stick on her plate. She scooped it up and quickly jammed it in her mouth. Christabelle raised an eyebrow. The interpretive dance of avoidance was obvious.

“Oh my God, don’t say things like that when I’m eating!” she gasped after having safely swallowed her food. She took a drink of water. “You’re going to kill me doing that.”

“You wouldn’t think it was so funny if you were the one that had to police those computers. I have seen things.”

“Yeah? What kind of things?”

“This is not first date talk.”

They smiled at each other, letting a little silence infiltrate the conversation. Christabelle looked down at her plate after a moment. Oh, it would be so easy to fall for Rena. So very easy. But the distrust from her divorce lingered. There had to be something else going on here, something she was missing. Why was it that she could be so observant about everyone else’s lives, but not her own?

“So, anyway, to kill time today I ended up spending the rest of my shift looking into the Marybeth Cooley case,” Rena said.

Will Christabelle help Rena look into the Marybeth Cooley case? And will that derail their budding relationship? Become a patron for as little as $1 an episode and find out!