In much brighter, less aggravating news, the novella I started working on at the end of May which I continued to work on in June is most definitely not a novella now. I’m at 44,000 words and still going, so. Yes. Definitely not a novella. Definitely a novel. Still doesn’t have a title. I’m only doing about 1,000 words a day on it and since I’m doing this without an outline, just seeing where the story goes, and I only have a vague idea of how it all ends, I could get it done this month, but I’m not going to carve that into stone.

In addition to this, I’m going to write a couple of other things. One is a short story called “Darling”, which will mostly be posted as a freebie here on the blog because it’s been ages since I’ve given away free, fictional words. The other is a novella called Voice, which will go in the next anthology. I will also be revising “A Ride in the Country”, also slated for the same anthology.

So, aside from the non-publishing debacle, things are chugging right along and I’m getting my To Do List of Doom wiped out.

Thank goodness for that.

You may have noticed the lack of blog posts in the month of February. Or maybe you didn’t. Maybe you didn’t care. Whatever the case, the point is that you can expect random and fewer blog posts to be the norm for a while. My world is in a bit of transition at the moment, sort of like when I had the existential crisis last year, except it’s less crisis, more change.

Anyway, that doesn’t mean that I’m not doing writer stuff. My goal to clear out my backlog of projects remains intact.

Last month I finished making notes on (Vampries) Made in America and it has all been put to the side for the moment. I’m sick of looking at it. I also finished revisions on Odd Section of Town and Firebugs and Other Insects. I’m satisfied with how they turned out for the most part and I think the next step for them is beta and minor tweaks/polish. I also wrote “A Ride in the Country”, which was actually less writing and more taking a chunk that didn’t make it into Night of the Nothing Man and revising it into it’s own little stand alone bit that will go into one of the anthologies.

This month, I’m going to be working revising short stories that I’m going to use for future anthologies. I’ve already finished a revision on “Nadie Has a Dog” just a few days into the new month (productivity, what?). Also going to be revised this month “People Are Terrible”, “Cover Up” (a rough draft that I found that I think will go nicely in one of the anthologies), “The House Down the Road”, and “The Seaweed Man”. Of these four, it’s “The Seaweed Man” that’s going to take the most work. It’s going to be more of a rewrite than a revision.

Slowly, but slowly, the backlog decreases. 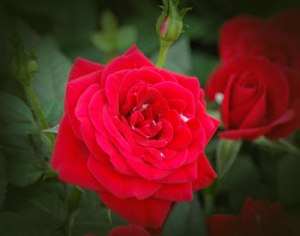 There is no love here.

The (Vampires) Made in America saga continues. I will continue to assess this disaster area and attempt to rebuild.

However, in decidedly more productive ambitions, I’m going to put The Odd Section of Town and Firebugs and Other Insects through their first revisions. I’ve already given The Timeless Man it’s final polish (see, some good things did come out of that (Vampires) debacle last month), so working on the other two Ivy Russell novellas makes sense. I’m fairly optimistic that these revisions will not cause me any eye twitches, but I don’t want to get my hopes too high. I’ve got a great ability to jinx myself.

I’m also planning on writing a new short story called “A Ride in the Country”. Don’t panic! This story will be for one of the in-progress anthologies, so it totally counts towards my objective of getting all of the old projects completed.

And, of course, I’ll be publishing something this month.

Look for it around Valentine’s Day.