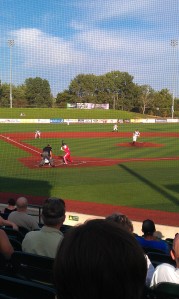 I’m afraid I didn’t go to many CornBelters games this year. Aside from the Home Run Derby and the All-Star game, I only went to two. One was a suspended due to rain in the 3rd inning. The other was a blowout loss, but at least I got all nine innings in.

There were two reasons I didn’t go much this season. One was, of course, money. Not that the tickets cost much; those prices are quite nice. But the cost of gas and the cost of concessions add up and all told, it was money I couldn’t afford to spend even if I wanted to.

And the second reason is I didn’t really want to. Don’t get me wrong. I love the Corn Crib and I love the Belters, but this team was in such flux it was hard to get into a groove. It seemed like every other week a player was traded. I realize that the manager was trying to put together a winning team (that didn’t work out since they went 29-67), but as a fan, it was rough.

Part of the fun of last season was rooting for the players individually as well as the team. We knew the names and the numbers. The 2011 team was blown up pretty early and I was up to the challenge of learning the new guys and finding new favorites. But then the new guys didn’t hang around very long either. There was no time to get to know many of them because if you blinked, they were gone. Once Alvaro Ramirez got traded after the All-Star game, I gave up. There was no point. I didn’t know the team and wasn’t going to be given time to get to know the team.

I like going to ballgames, but for me, I like it when I can relate to the team I’m rooting beyond the numbers on the jersey. It was a lot of fun cheering for Mike Mobbs and Ramirez and Bobby Pritchett last year. I knew their names, knew their numbers, knew their walk-up music. It was like rooting for friends.

This season I was rooting for a bunch of strangers that I wasn’t allowed to get to know. It wasn’t as much fun. As such, I wasn’t as het up and driven to go to games. I feel bad about that.

I hope next year the players are able to hang around longer so the fans have someone to root for. Winning draws fans, but so does a little consistency.