‘Round these parts, folks go to the boat for a good time. For those of you not familiar with the Cornfield and its vernacular, “going to the boat” means going to the riverboat casino in Peoria.

This past Saturday was my roommate Carrie’s birthday. Since it was a milestone birthday (I won’t say what stone that mile marks), she wanted to do something big. Our original plan was to go to Chicago, but since she hurt her knee and wouldn’t be able to do that much walking, she decided that going to the boat would be a good alternative. 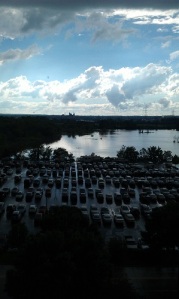 We stayed at the hotel. Our room was fabulous with a lovely view of the parking lot and the river beyond. I’m not joking. For a parking lot view, it was still really nice. I could write lyrical poems about the bathroom. The shower was divine. You can’t say that about most hotel showers.

We hit up the buffet that night for dinner. It was a seafood special, perfect for Carrie’s birthday as she is a big lover of seafood. It was a pretty nice spread and the food was pretty good. I’ve never had seafood lasagna before and wasn’t sure I’d like it, but it was some tasty, tasty stuff.

I was probably the youngest person at the buffet and frankly, I didn’t mind it. It made for a quiet meal. The guy sitting next to us was getting his prime rib on. Meanwhile, another lady went back to her table with a plate of mashed potatoes and brussel sprouts. Carrie looked horrified. “Is she being punished?”

Considering the dessert spread, maybe she thought she needed to earn that German chocolate cake. Laws knows that if salad didn’t count as a vegetable then I wouldn’t have eaten one all weekend.

The casino was loud and bright and crowded, but we managed to find our way to the lowest floor (deck?) and the slots. The dress code was quite loose as we saw some people dressed to the nines and other folks that didn’t seem to own any shirts with sleeves. A few people were in their pajamas.

The first night I won about forty dollars and Carrie won about fifty. The second night, we wore more on the losing end, but we still managed to come out ahead.

I spent my winnings on Steak n Shake.

We both had a lot of fun, but we both realized that we’re not casino people. We found the prime rib guy working two slots at once and he had at least 200 bucks in one of them. Another guy was sliding into Carrie’s seat as soon as she got out of it because he thought her machine was hot. We might have spent an hour or an hour and a half at most in the casino each night. It was fun while we were winning, not as fun when we were losing, and there were a whole lot of people that resembled zombies in there.

Definitely a fun once-in-a-while weekend thing, but we couldn’t make a job of it.