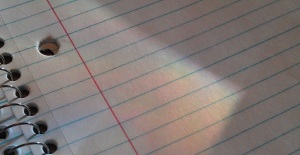 So as I may have mentioned in my previous projects posts that one of my plans for the year was to revise Spirited in Spite to doneness and that I was going to start this month.

Here’s a little back story on Spirited in case I never mentioned it (which is entirely possible since I don’t talk about my projects with any sort of regularity):

It started out as one of my earliest NaNo losers under the title The Spinning Room.  I can’t remember exactly how the loss took place. I think I ended up not finishing it during the month, but getting it done sometime afterwards. The original idea was for something straight horror, but at some point during the first draft, I realized I couldn’t keep my face straight that long. I think that’s part of what made it so hard to write during NaNo; I was doing it wrong.

When I decided to revise it with a lighter tone, it went a lot easier. I put together a new draft and revised it once more at some point and then left it alone to do other things.

Apparently, I re-read it sometime last year, but I don’t remember doing that.

I started doing the revisions on the second. I was done within a week.  And that was going slow.

Now, this doesn’t mean I’m done. There are minor things that I thought about changing, but didn’t change because I’m not sure about those changes yet. I’m going to let it all rest for a little while and come back to it again.

But I’m no longer thinking that it’s going to take me a better part of a year to get this manuscript done.

Looks like A Tale of Two Lady Killers is going to get its shot, too.