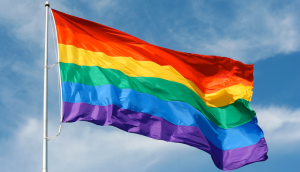 The reason I think I am so all for it and probably would be all for it even if I wasn’t a bisexual gal is because of my great-aunt and my childhood.

I have a great-aunt who is a lesbian and throughout my childhood she and her then-girlfriend were often present at family functions. These were happy occasions usually, filled with food and laughter and hugs. Wonderful, warm occurrences in my existence. Now, the children were never expressly told that my great-aunt was a lesbian (I was in my teens before I did that math and then got confirmation from my mother), but in my kid-brain I put her and her girlfriend together. They were always at the family functions together so in my head they were one entity, a team, a partnership. And I remember a lot of my cousins referring to them likewise.

The big thing about these family functions, though, was that even though it was not expressly stated to the children that my great-aunt was a lesbian, none of the adults treated her as anything but a beloved family member. She was never treated as an other or a less-than. She was never treated, at least in my memory, as a deviant or a disappointment. She was loved and respected and cherished and so was her girlfriend.

So to see people so dedicated to treating people like my great-aunt as other or less-than, to deny them a government contract that grants them a certain set of rights that are only granted to couples that enter into that contract, to see people that I share DNA with, my own blood, HER own blood, putting their religion and their adherence to a cherry-picked handbook above someone that they are told by that same handbook to love, is just fucking baffling to me. I don’t get it and I decided on Friday, once and for all, that I’m not going to get it and I don’t want to get it. I’m sorry you feel that way and I feel sorry for you because you feel that way. I’m sorry you choose self-righteousness and a promise of an afterlife by some super judgmental god over loving and protecting and relating to people in the here and now. But if that makes you happy (and considering how many folks are frothing at the mouth right now, it doesn’t seem to make them THAT  happy), then you do you.

The way you cut your own humanity off like it’s some sort of defect, though, that’s pretty less-than.