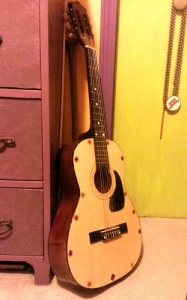 Last December I mentioned that I’d decided to teach myself to play the guitar. Aside from slicing up my fingers too bad that I couldn’t play for a week in January, a couple of days when I was in Chicago for Cubs Con and my guitar was not, I played every day in the beginning and as the year has gone on I haven’t been quite as dedicated, but I do play most days of the week.

After a year of this, here’s what I can tell you.

Okay, that’s an exaggeration. I’m better than terrible. I’m even better than bad, but not quite as good as okay. My hands are too small to play a lot of chords successfully, but I can play some well enough; I can’t strum with a pick, but I don’t do too badly with my fingers; I can’t play the songs I know that well, but I can play them well enough that you might recognize them if I tell you what they are. I think I’m at my best when I playing three of the four scales that I know.

(For the record, the songs I can somewhat play include a bunch of Monkees songs, a few Christmas carols, “Do You Love an Apple”, “Cryin’ in the Rain”, and “Good Morning”.)

It is clear that I do not possess that musical gene required to be able to pick up an instrument and understand it within a few months and probably not even a few years. I can play the chords, but I can’t speak the language. In a way, it’s a drag because I love music and have always dreamed of having some latent ability to create it.

But in a way, it’s also kind of a freeing thing for me to have this sort of hobby that allows me to be bad at something, to only do it because I enjoy it. I’m not trying to make money off of it. I’m not trying to be taken seriously. It differs from a lot of my other creative work because I’m doing it for pure enjoyment. I enjoy writing, of course, but it’s business, too. It’s work. I have to hold it up to a certain standard. I enjoy making jewelry and sewing and drawing, but those things also have a certain standard because in the end I want to create something useful. Even drawing, which is my worst thing, when I’m finished with a picture, I want it to be good enough that you’d at least hang it in a kid’s room.

The guitar, though, is pure fun. And it’s fun being allowed to be bad at something for a change and just play with it.

If I can’t learn the language, I’ll make up my own.