Last month I went through my sewing drawer and bin, trying to figure out what I could get rid of because I have a plethora of fabrics and remnants and clothes that I thought I’d be sewing with and so far haven’t yet. I really can’t keep hanging on to these things if I’m not going to do anything with them. And it’s been far too long since I’ve actually sat down and stitched on a project.

So, while going through things, I found a couple of panels that I could try to sell on eBay and maybe later I could try selling some of the remnants I probably won’t use, but I also came up with two projects I could work on that would use up several bits and pieces and shirts. My dumbass thought I could get both of these things done in a day. In reality, it took me about two and a half weeks, give or take me not paying much attention to days of the week.

I made the skirt from a pair of jeans that lost their life to the curse of friction, an old t-shirt, and the leg of a pair of pajama pants. Probably the easiest thing about this pieces was cutting the legs off of the jeans and ripping the seams out of the shirt and the pants. The actual piecing and sewing (remember, I sew by hand) turned out to be much trickier than I anticipated. In fact, I ended up having to do one of the cheetah print panels twice because I screwed it up the first time and had a weird bulge in it. 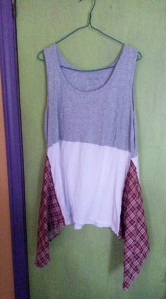 The other piece I ended up doing is a handkerchief style tank. I sewed together to different ribbed tanks to get the color block effect. I then split the lower tank up the side and added in the plaid panels. Turns out that was the hardest part, trying to get the angles just right. That and all of the sewing because of the angles and the hems I needed to create.

And in the end, it doesn’t work for me. I don’t like the way it looks on me. However, I do think it will look quite fetching on my middle niece who likes this sort of style. She’s shorter and smaller than me (obviously), so I think it will hang better on her than on me. In the end, it won’t go to waste.

So, I’ve made some progress in cleaning out my sewing stuff and got some cute things in the process.

I have to remember that’s how it works when I actually sew.