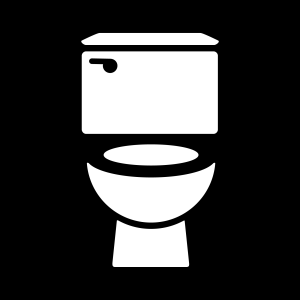 “OMG! They’re letting MEN use the GIRLS room! What is this world coming to?”

Hopefully, a quick and painless end via meteor, but I feel like we won’t be so lucky.

It seems that people who have never met a transgender person, never educated themselves on transgender people, and therefore have no fucking clue how it works are convinced that the ONLY reason a transgender person would go into a public restroom is to commit heinous acts of violation against others and not to, ya know, take a piss.

First, let’s clear up a few things and do a little education here. Here are some definitions you need to know.

A transgender person is someone whose gender identity doesn’t correspond to their biological sex assigned at birth or someone who does not conform to societal gender norms or roles.

A transvestite is a person, especially a male, who assumes the dress and manner usually associated with the opposite sex.

A sexual predator is someone who would dress as the opposite sex for the specific purpose of entering a bathroom for voyeurism or to commit sexual assault.

Oh, hey, were you one of those guys that made a joke that you’d totally dress up as a chick so you could go into the girl’s bathroom because your working knowledge of life apparently comes from repeated viewings of teen sex comedies? Congratulations! You’re a sexual predator!

“But I was just joking! I wouldn’t actually do it!”

I don’t give a fuck. You’re part of the fucking problem, Beavis.

There is a HUGE bathroom problem. The problem is that men will gather their torches and pitchforks to protect their womens from the big, bad trannies lurking in bathroom stalls, but at the same time would scrutinize every detail of a woman’s account of actually being sexually assaulted by a cis male because this sort of accusation could destroy a man’s life, you know. The same man rending his clothes about the idea of a transgendered person peeing in the stall next to his wife at Target will automatically say that any woman accusing a celebrity of rape is lying and only doing it for the money. The men outraged about a trans woman needing to pee while out and about in public are the same ones that will tell you that “boys will be boys” and “she shouldn’t have drank so much” and “if you don’t want that kind of attention, don’t wear those clothes”.

Am I singling out the men here? Yeah, but I’m going to admit that there are women that feel the same fucking way and shame on them, too.

There’s another BIG bathroom problem that’s hardly getting a mention at all. You’re all so worried about what’s going on in the women’s room, but what about the men’s? What about the transgender women that would be forced to use the men’s room due to their sex assigned at birth? What about them?

That’s a rhetorical question because I already know what you bathroom defenders would say about them. You’d say, “Fuck them. They get what they deserve if they go into a men’s room because that’s what happens when you’re a freak.” My pants aren’t on fire, so you know I’m not lying.

Because this battle of the bathrooms isn’t about protecting women from sexual predators. If that were true, if that were really the endgame, then public bathrooms would not be your chosen battle ground. College campuses and right inside the home would be the places to start.

This isn’t about keeping women safe in the bathroom. It’s about keeping transgender people out of society, out of view, to make it harder for them to exist, to be normal, to be like everyone else. Because that’s what they really want, you know. They don’t want to destroy the sanctity of the public bathroom (God, if that were only a real thing, then maybe they’d be cleaner); they want to be treated with the decency and respect you would treat any human that needs to go the can when they’re out running errands, that you would treat any human anywhere, regardless of circumstance. They want to be like everyone else.

And in the end, that’s what this whole fucking debacle is about, isn’t it?

You and your ignorant bullshit (courtesy flush that deuce, if you please).

If you’re that concerned about the inner workings of the women’s public restroom (Seriously, what the fuck do you think happens in there? What are YOU doing in there that’s so goddamn interesting?), maybe YOU should only pee at home.

The rest of us, trans and cis, are happy to pee together in peace.

So long as you don’t piss on the seat.

*Definitions for cisgender, transgender, and transvestite were taken from dictionary.com. The definition for sexual predator was created specifically for this post, but still pretty accurate, no?