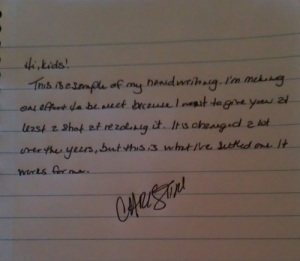 I get a lot of comments on my handwriting.

Because people are more fascinated than impressed with my handwriting.

As you can see from the picture, I definitely have my own style. It’s half-print, half-cursive. I use old-fashioned A’s and my lower case N’s look like a smaller version of the capital form. It’s pointy and a little sloppy. Like I said in the note, I made an effort to be neat. If I don’t, then it looks a whole lot worse.

Most of the time it looks worse.

If I’m writing for me, then neatness be damned. I can read it and that’s all that matters.

Except sometimes even I can’t read it.

When I was in college, I was a serious note-taker. I was good at picking out what I needed to know and writing it down, but this meant that I wrote a lot. And sometimes, in an effort to keep up, neatness ended up sacrificed on the alter of speed and in the end there were some things that even I couldn’t read. I admit that some of my psychology notes looked like I was possessed by a demon and started writing in tongues during the lecture. Forget asking anyone else to make a guess, not when they have so much trouble reading it in the first place.

Handy, in a way. Almost like writing in code. Except for the times when I can’t even break it.

The big thing that gets commented on the most is that my handwriting is so small. To be fair, the notebook paper I used for the picture is wide ruled, but it’s even noticeable when I use college ruled (my preference). Even my still-learning-to-write niece has commented on the smallness of it.

For some reason, my tiny handwriting drives people crazy. I don’t know why but that’s just more comfortable to me. Writing bigger feels foreign and awkward to me. Oh, when I was younger I tried to write bigger, using that soft, curvy style that most of the girls I was in school with used. But it never felt right and I couldn’t get it to stick. Inevitably, I’d go back to writing small and pointy letters. Bubble letters and I’s dotted with hearts just doesn’t come naturally to me. Small and sharp is the way I go.