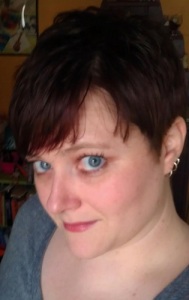 I got my hair cut and colored last week. No big thing. I try to go in every six weeks because by then my hair is getting shaggy and the color has faded from red to a copper. This last time, though, my stylist Tammy asked if we could do something different with the color.

She put in the red lowlights like always, but wanted to do something other than leaving the coppery remnants from the previous colorings. She asked my permission and I said sure. I’m always game to do something different with my hair.

Tammy mixed up the color, but didn’t tell me what it was. I didn’t ask. I just let it ride.

I was a little surprised when she washed it all out and it ended up being so dark, but I like it. I think it looks good. I can’t wait to see what happens when the color starts to fade.

I have this tendency to be quite cavalier with my hair. When I went from long to shoulder length in my late 20’s, I told the stylist to do whatever she wanted, just cut it off. Really. When I decided to get the pixie cut, I basically quit coming up with reasons not to and just said, “fuck it”. Every time I’ve colored my hair, it’s been with the idea of “let’s see what happens”. I’ve done it all with a spirit of adventure and an understanding that I could deal with the fallout later if I didn’t like it.

I just wish I could be so free-spirited in the rest of my life. Most of my decisions are made based on taking very little risk. It’s all about being practical and mature, very security-conscious. I’ve always been a rather conservative risk-taker in my life, but there have been times, most notably in my early 20’s, when I was just like, “Hey, whatever. Let’s ride. I’ll deal with any consequences later. I want to enjoy what’s going right now and see how far it can go.” And I’ve paid for it. And in ways I’m still paying for it.

But I’m also paying a heavier price for being so cautious, I think. It’s sort of puts a cramp in my life, living responsibilities first, always. It’s hard to have a good time being so hung up on being safe. I can’t just say “let it ride” anymore because I’m always too busy thinking about the next thing. Part of it has to do with the instability of my income and my overwhelming need to pay the bills. But part of it is because I’ve become very complacent in my 30’s and I don’t want to bust out with something rad because it might mess up my sleep schedule.

And that’s a drag.

I need to live my life more like I do my hair.

At least, maybe, a little bit.