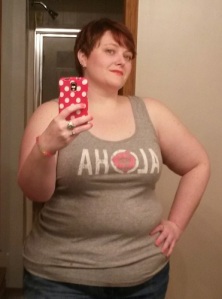 Today, I want to point out a very specific body quirk that never fails to baffle and amuse me.

It’s a reasonably known fact that when it comes to body symmetry, things can be slightly uneven. Typically, the dominate side is slightly bigger simply because it gets worked more. Though, my friend Haley told me that while most women have one boob bigger than the other, it’s usually the left boob that’s bigger regardless of the dominant side. She brought it up because she wondered if that were true for me, since I had breast reduction surgery. It turns out, my left boob was bigger both before AND after surgery, though  the size difference after surgery is much less notable.

But I digress a little (you people know so much about my boobs…).

An example of my body symmetry being off with my dominant side, in my case the right side, being bigger can be seen in my calves. My right calf is bigger than my left, though it’s not immediately noticeable. Lots of people have body symmetry like this. It exists, but you only really notice it if you look.

This is not true for my upper arms.

Of all of the body parts I have available to cause me insecurity, my upper arms are the part I have picked to worry the most. I started doing certain weight lifting exercises to strengthen, tone, and shrink my upper arms, and they’ve been working! But one little thing remains.

My right arm is significantly bigger than my left. Like immediately noticeable, ridiculously bigger.

This should give you a decent idea of the size difference, but you can really tell when I spread my bat wings (which I don’t have a picture of). It’s a thing of unsymmetrical awe.

I have no idea if I keep doing these exercises if I can get my right arm to shrink down closer to the size of my left, but it certainly won’t hurt anything to try. And if it never happens, if my arms remain lopsided forever, well, I can live with that, too.

I’ll use it as a conversation piece.