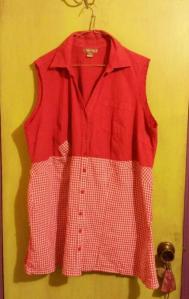 I’m running out of sewing puns.

Anyway, at some point during my existential incident, I decided that I didn’t like my mini dress as much as  thought I did. It was pretty okay, but it wasn’t exactly what I wanted. And so it became a project during my unhappy productivity. 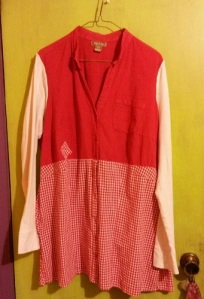 The first thing I did was cut off the collar because that had been annoying me since I started. And then I decided to add sleeves. Yes, I know. It was a vindicating move for me to get rid of the sleeves that the shirt originally had, but that’s only because I hated them. In the end, I really wasn’t feeling the dress without any sleeves. So I took the sleeves off of a third shirt that was destined to be upcycled and added them to the dress. I wasn’t crazy about the cuffs on the sleeves and second opinions questioned the overall length of the sleeves, but I felt those were minor problems. I took off the cuffs and was much happier with the overall look. 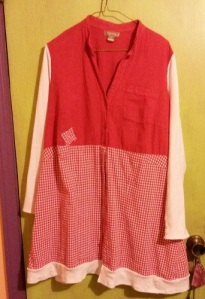 And then came the matter of adding some length. I knew that doing so would make the dress a bit long to be called a mini, but I felt it was necessary. Point one, until I lose some junk in my trunk, a mini dress is dangerous for me to wear if the fabric isn’t heavy enough and this fabric didn’t have enough weight. Point two, with the white sleeves added, it felt abrupt. The strip of white (taken from the same shirt as the sleeves) added to the bottom tied everything together. And it’s still pretty short.

The final two decisions involved adding a button to the bottom of the dress to compensate for the new length and taking off the breast pocket. In the end, I decided against the button and for the pocket removal. I added the patches to cover up where the pockets were more seriously attached (I had to do the same thing on the other shirt that I used for the bottom of the dress). 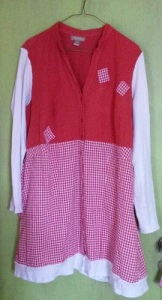 And then I called it done.

I’m not messing with it anymore (unless it’s some follow up stitching to reinforce what I’ve already done). It now contains three shirts. That’s gotta be enough.

It is no longer the mini dress. It’s now the ragdoll dress.

I’ll put that new name to the test later this month.