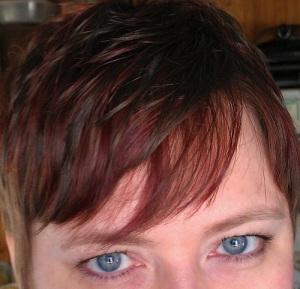 I have a mild problem with anxiety. Back in the day, smoking is what helped me medicate it. I smoked when I got anxious. The nicotine helped when I’d get that sudden flare of what I called “fuck up anxiety”, that sure fire feeling that I had just fucked up even if I hadn’t, or if I had, it was so insignificant that an ant wouldn’t notice it because it was such a small thing. Just the act of getting the cigarette out of the pack, lighting it up, taking the first inhale, smoking that sucker down, helped take the edge off of that.

I don’t smoke anymore, but I still have that fuck up anxiety.

I’m having it right now, actually, as I type this.

It likes to settle in my shoulders mostly and ride up the back of my neck. My brain likes to replay whatever it is that I’ve done or think I’ve done until it’s so huge and wound up so tight my head would spin off if it were to let go. It makes me want to primal scream in an attempt to release the pressure in my head and drown out the voices assaulting my character.

It’s really annoying. I’ve yet to come up with decent coping mechanism in the five years since I quit smoking. Meditation helps, but funnily enough, when the anxiety acts up, I don’t want to meditate. Kind of defeats the purpose there, huh?

Now, I know that compared to some of my friends, I’m getting off easy. Their anxiety and the resulting attacks can be debilitating and that’s pretty awful. I do acknowledge that I’m lucky in that respect that it isn’t worse for me. I can actually still function despite the anxiety.

I don’t need any help from my brain when it comes to screwing things up. I can do bad and feel bad all by myself over legit things. I don’t need to blow up tiny seconds and non-existent moments into a disaster.

Sometimes, it’s a once in a while thing. I can go weeks and not have a problem. And then I have times when it’s basically an all the time feeling that can go on for weeks. It lightens up, but never really goes away. It’s the latter that I’ve been dealing with lately. It makes me a right irritable bitch because the constant anxiety puts me on edge and within a day I hate everything, everyone, and your mother, too.

I do need a better coping method to riding it out, though. Because this habit of doing nothing but feeling bad and being irritated and not meditating isn’t working.

Stupid anxiety monster hanging around the closets of my mind.