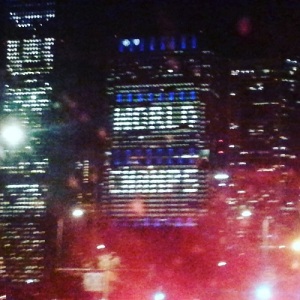 “Hey, do you wanna go to the Cubs World Series parade?” I asked my roommate Carrie upon waking her up Thursday afternoon.

“Do you wanna go?” I repeated.

And so began the whirlwind.

I haven’t been to Wrigley Field since 2012 when I saw the Cubs lose their 100th game that season. Time and money constraints have prevented my return. I didn’t luck out in the postseason ticket lotto and couldn’t afford them on the secondary market (honestly, I couldn’t have afforded them if I’d won the lotto, but that wasn’t going to stop me this time). I felt like I’d missed out on everything during this magical season. The least I could do was find a way to get to the victory parade. This feeling was cemented when I found myself in tears on the drive home from work Thursday afternoon because they’d played the Harry Caray call/final World Series out mash-up on the radio. Of course, I’d been bursting into tears regularly since their win Wednesday night.

When I got home, I DM’d my Cubs bestie Harry and asked if he was ditching work to go to the parade and when he confirmed that he was, I told him that I was trying to work it so I could go to0.

“If you can get up here, I’ve got a hotel room for you by Wrigley.”

Harry had booked the room for his mom to attend the celebration, but she unfortunately couldn’t make it.

Call it serendipity. Call it fate. Call it divine intervention. Whatever name you want to put on it, fortune smiled on me for once and I was more than beaming back.

Within ten minutes I was waking up Carrie and throwing things into my overnight bag (notebook and pen first, of course; writer life). By 3:30, we were on the road to Chicago. Three hours later, driving through rush hour traffic on Lake Shore Drive, I pointed out the buildings lit up in celebration of the Cubs winning the World Series. Carrie took pictures of them through our unfortunately dirty windshield.

After picking up Harry and getting settled at the hotel, the three of us went out for a celebratory dinner. The mood was giddy edged a bit by the surreal. Despite all of the tangibles, there was still a misty fantasy quality about the whole thing. The Cubs had won the World Series and we were going to the victory parade in the morning. That’s probably why I struggled to sleep Thursday night. A long held dream had finally become reality and it was just hard accept.

Friday morning, we walked around the block from our hotel to stand on Addison and watch the parade. Here, less than a mile from Wrigley, there was a crowd lined up against the barricades, but not nearly as suffocating and dense as what was around Wrigley or lined up along Lake Shore Drive or packed into Grant Park. The morning weather was pleasant, a little chilly, but really perfect for a parade. The crowd vibe fed into the surreal joy and the three of us stood there, soaking it all in.

The parade itself happened so fast. Part of it was that the buses were going by at a quicker clip since this wasn’t prime parade real estate and they’d left the gate late to begin with; the huge crowds on Lake Shore and at Grant Park were waiting. The other part, the more personal part, is that when you’ve been waiting for something for a long time, be it an hour for a parade to begin or since you became a fan in the late ’80s for a championship to be won, when the moment arrives for you to experience, it feels like it happens too fast. Like even at a snail’s crawl, it still wouldn’t happen slowly enough to be thoroughly enjoyed.

To see the guys that I’ve been cheering for all season, to see the guys I’d cheered for in past seasons that almost feel like past lives, to see the coaches and the front office and the families, the whole shebang that had to come together just perfectly to make this one incredible thing happen, to see them all go by in total victory put my heart into a state of bliss that it won’t forget. This is a memory that won’t be corrupted.

After the parade, the three of us went back to the hotel room to watch the rally for a few more cheers and tears of joy. We bid Harry farewell and then Carrie and I left the city. It took us over an hour to get out of city, almost like Chicago was begging us to stay. And I wish we would have. I would have loved to have spent the weekend there, walking around Wrigleyville and soaking up that vibe until my seams split and I burst with joy.

Instead, happy and exhausted, I drove back to the cornfield, content that I had the pleasure to experience just a little bit of history.