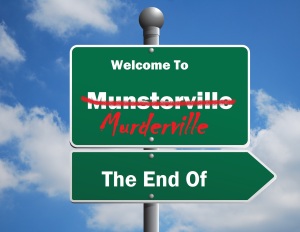 Haskell and Leora Jones were big on family.  So big on family that they had five children: Drusilla (Dru), Nicodemus (Nico), Tallulah (Lu), and twins Dashiell (Dash) and Dartagnan (Tag).  They ran a successful family business that only their daughter Lu didn’t work in, much to their displeasure.  And they had a family dinner most nights of the week even though their three oldest children no longer lived at home and in the case of the two oldest, had families of their own.  But that didn’t stop Haskell and Leora from cooking huge dinners nor did it stop any of the children or their husbands or their children from stopping by for the evening meal without invitation nor forewarning.

Lu walked into her parents’ house in a foul mood wanting nothing more than to eat until she reached peak food coma, but without the effort of actually cooking.  Her foul mood fled as soon as the door closed behind her, not because of the impending food, but because no foul mood of hers could withstand the cute of her two nephews, Ezra and Roman.  Aged five and three respectfully, the two biracial boys were biological half-brothers adopted by Nico and Josh when they were tiny.  Their dads got a kick out of people saying that the boys looked like them.

Ezra and Roman barreled into their aunt as soon as they heard the front door slam shut.

“Auntie Luuuuuuuu!” they squealed, crashing into her legs and hugging her around the knees.

“Hello, my minions,” Lu said, giving each a hug in turn, kissing them both on the top of their heads.  “What evil have you done on behalf of your overlord today?”

The two boys answered in only giggles.

“Are you heathens here alone or is Nan and Pop around?” Lu asked.

“Yes, but you also don’t like pancakes,” Lu said.  “Your opinion can hardly be trusted.”

Roman giggled while Ezra stuck his tongue out at his aunt.

“Get away from me,” she said, giving her nephews a playful nudge.  “Go hassle Pop for quarters or something.”

The two boys tore off through the house.  Lu knew they passed through the kitchen because her mother yelled at them to slow down.  Lu followed them at a much calmer pace.

Leora was at the kitchen counter.  Four different pots were going on the stove, something was in the oven, and it looked like there was something in a bowl that was in the process of being prepared.  Her mother moved like a whirlwind amongst all of it.

“Are you here for dinner, Lu?” she asked.  “I think I might just have enough to feed you, too.”

“Good God, I hope so,” Lu said, looking at the ensuing feast.

“She started throwing more food into pots as soon as Josh walked through the door,” her brother Nico said.  He was sitting on the other side of the kitchen with said Josh at the table.

When it came to Lu and her siblings, an argument could be made that Haskell and Leora took home the wrong baby at some point, only no one was quite sure which one.  None of the Jones children looked like their parents.  And with the exception of the twins, none of them looked like each other, either.  Lu was short with a witch’s nose and hazel eyes that looked like they could see through anything.  Nico was tall with gangly limbs and soft blue eyes that looked almost like he was on the verge of crying all the time.  The only thing Lu and Nico had in common appearance-wise was they both had brown hair, but Lu’s was much darker than Nico’s.

Lu sat down heavily at the table with Nico and Josh.

“And how was your day, dear?” Nico asked with a sly little smile.

“My cases are being audited,” Lu said bitterly.

“Yes, exactly,” she said, pointing at them both.

Don’t miss a clue! Check out Murderville or Patreon!

2 thoughts on “Murderville: The End Of- Episode 4”