Davy Jones of The Monkees passed away on February 29, 2012 and he took with him to the great beyond my love, respect, and a little bit of my heart.

I first became acquainted with The Monkees during their 20th anniversary tour. I was six and it was love at first sight and sound. Davy was my first favorite (over the years, they’ve each been my favorite to the point that now I can’t really pick). He was cute, he was small, he had a tambourine…what more could a six year old ask for?

Mom let me watch the show in the afternoons when everyone else had to be outside playing. I’d stay up extra late on the weekends to watch it, sneaking out of my room while Mom slept (Dad worked nights) to watch it on the TV in the living room (we only had one TV).

Then and Now: Best of the Monkees was the first tape I ever asked for. It was the first of ANYTHING I ever asked for, as I was raised by parents that didn’t abide by children asking for things every time we went to the store. But I saw the cassette among the others in the rack at Wal-Mart and I couldn’t stop myself. I asked my mother for it and instead of getting the negative answer and the lecture, Mom ended up getting it for me.

I still have that tape.

The first story I wrote (okay, maybe not the first, but definitely the first one I remember writing) involved The Monkees. Today it’s commonly known as fanfiction, but at six or seven, I had no idea there was a name for it. It was a “book” I wrote, complete with illustrated cover and big words (albeit misspelled). I was very proud of that story.

I still have it, tucked away with the papers I never want to lose.

Ten years later, I was living with Dad in housing and my parents were going through a rather bitter divorce. The typical challenges of being 16 were compounded by the war zone my parents created. Most kids hated going to school, but it was the only place I got to feel like an actual kid. At home, I was expected to be the adult.

As my luck would have it, The Monkees decided to celebrate their 30th anniversary, reminding me of the happy fun-times of my childhood. I dug that old tape out of the few things I had and it became my life raft in the stormy sea of what had become my life. I submerged myself into rediscovering The Monkees. I constructed a happy place out of their music and the show, filling it with news and stories and CDs and solo work and pictures and memorabilia and fandom.

The summer before my senior year, 1997, I worked for my cousin in her daycare. When I found out that The Monkees would be in Chicago in August, she became my partner in crime so that I could go to the concert.  Not only did she help me get the tickets, but she also took me and paid for the hotel room. The entire Monkees Trip Experience deserves to be retold in another post (and probably will be), but suffice it to say, I had an amazing time at the concert, watching three of the four men that I credited with keeping my head above water perform on stage.

My senior year is forever tied to The Monkees. I listened to Justus so much I’m surprised the CD didn’t wear out. Mom enabled my obsession, getting me a cardboard cutout of the group from a music store. Papa got me a few their CDs. My sister helped me decorate my graduation cap with the Monkees logo. I had all four of their names written on it. If it wasn’t for them, I wouldn’t have made it through high school with any sort of sanity intact (though, friends might argue the sanity part, since my graduation cap also featured “Loco 4 Life” written on it and my nickname was Skitz, short for skitzo, but I stand by what I mean).

My Monkees Happy Place was built to last and over the years, I’ve only added to it with more music (not just The Monkees, but their solo stuff as well), shows, and memorabilia. Family and friends see Monkees stuff and they think of me. I had a friend bring me a Monkeemobile model car from Canada because he saw it there and thought of me. I’ve grabbed unique items off of eBay and been able to find the not so easy to find music on Amazon. I visit it often; my iPod is full of Monkees music and on shuffle. I don’t go a day without hearing one of their songs. Bummer of a day? Nothing an episode or two can’t fix. I’m working on a collage of their album art. It’ll be really great addition to the happy place when it’s finished.

But first, I need to fix the happy place.

On Leap Day, the Universe kicked down a wall of my happy place. Davy’s death leaves a pretty big hole, one that I will patch up with memories and music and pictures. It won’t be the same, of course. But even though Davy slipped from the mortal coil and crossed the horizon into the next world, he left behind a lifetime that he shared with the world. His smile, his laugh, his voice have all been preserved. It’s not the same, but it’s not that different, in a way. At least for someone like me, a fan that only got to see the star from a distance. It’s the future that’s been compromised, not the past. He can’t do anything more, but he’s already done so much.

And he did more for me than he can ever know. Except maybe now, he’s in a place that he does. I hope he knows how much I appreciate it all. 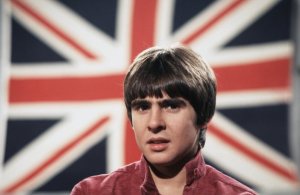 Catch you on the flip side, Davy Jones.

One thought on “Remembering Davy”