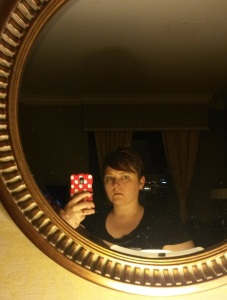 Depression is a fact in my existence. It comes and goes. Sometimes it has a trigger, sometimes it doesn’t. I had a very serious bout of it in my late teens/early twenties. I do not take medication for it. I manage it through lifestyle and I can go very long periods of time without any issues.

Another fact of my existence is that I get a touch of the blues around the Christmas holidays. I dread the period of time between Thanksgiving and my birthday because it’s hectic, it’s stressful, it’s demanding, and it harshes my mellow. Take the family obligations, add a day job in retail, and lingering aches from other holidays in different retail jobs and the stress is enough to trigger some blues. I don’t like to call it outright depression, but I’m definitely down during those couple of months.

As I mentioned in this post, for whatever reason, my holiday blues were worse this past Christmas season. I’m still not sure exactly why. However, the rule of thumb is that around my birthday, I’m typically feeling better. I love my birthday and all the entitlement that it brings too much to feel blue. And I felt better on my birthday. Not tip top since the blues had been so intense, but I was definitely feeling better.

And then I started feeling worse.

And now I’m back to better.

And it’s really fucking annoying. Because, if I’m going to be honest, it’s not just the blues anymore. It’s more than that. It’s depression.

I hate those days. Not just because they’re bad days, but because they’re days I’d forgotten. They remind me of the time I broke my brain, when the depression was so bad I began having symptoms of psychosis. I don’t like to be reminded of such things. It takes me to bad places. And the bad places are not where I want to go, kids. I do not like to entertain the bad thoughts that swirl through my head like a tornado.

Some days I don’t have a choice. It’s a tornado! If a tornado is going to hit your house, there’s nothing you can do about it. You hunker down and hope for the best. And that’s kind of what I do. I do what I need to do to get through the bad days, reminding myself that it’s just a day. Give it a day. Do my chanting, do my journaling, do my exercises and my meditating, stick to my routine, and the storm will pass.

Thankfully, there hasn’t been much in the way of damage.

Right now, I’m seeing blue skies for the most part, and I’m working hard to keep it that way. I know that there are some outside triggers that have been exacerbating my issues and I know there’s not much I can do about most of them. But I’m doing what I can do and eventually, this will all just be another incident in my depression history.

That’s the way I want to think about my depression.

One thought on “And So It Lingers”