The Seattle trip was a good one. We did the touristy things like going to the Space Needle, MoPop, the zoo, the aquarium, and Pike Place Market. We also ate really well as I’m now convinced that you cannot get a bad meal in Seattle. We drank at the hotel bar while watching playoff baseball and ordered room service so we wouldn’t miss any of the final Cubs/Nats game. The weather was cool, but pretty every day but one, when it was rainy and chilly, and we spent that day at the aquarium, so we didn’t notice. We fed penguins and touched sea cucumbers and petted Muppet fur and I ate a donut at the top of the Space Needle. Our hotel had a magnificent view of the water and the mountains, a gorgeous sight to wake up to. I ate breakfast at a little table looking out at that view every morning and watched the sunset from the balcony every evening.

Most importantly, I refrained from obsessive social media checking during the trip. Oh, I posted pictures to Facebook and Instagram and posted a few tweets during those six days (several during the last stretch of the trip home since our flight was delayed and it was starting to look dubious that we would ever leave Gate G5), but the obsessive checking and scrolling that I had vowed to refrain from before leaving was indeed refrained from.

And my sanity feels so much better.

In a way, the trip to Seattle was almost like taking a trip to a different reality. There, the agenda was different. My focus was on the immediate, the tangible. I was there to do some exploring and a little research. I was there to experience. And so I did. I forgot about the rest of the world for six days and I just experienced my immediate surroundings. 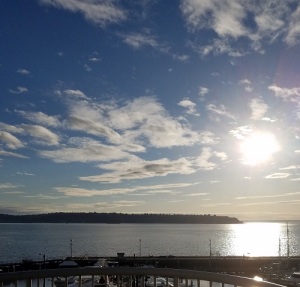 I came back from Seattle feeling better than I have in months. My anxiety isn’t quite as close to critical. I feel calmer, more clear-minded, more relaxed. Refreshed. Hell, even while I was there I felt the shift in my sanity’s equilibrium. I was able to solve the outlining problems I was having on The Stories of Us After Them while I was there. I felt inspired, which helped with the bit of research I had planned. Seattle ended up being a salve on the open wound that was my mental health.

Now, I acknowledge a few things about this whole break. First of all, I know it’s a privilege for me to get to take this break. I’m lucky enough to have a roommate who was willing to drag me along on her trip and provide me the opportunity to get away for a bit and explore and research a new city. Not everyone has that sort of opportunity and I am forever grateful to her for providing this one for me.

I also acknowledge that not everyone has the privilege or the opportunity to disengage, especially for that long. Not with the way this government is operating. I think it is important for everyone’s mental health to take a break now and then, but I understand why it’s not possible for some people. 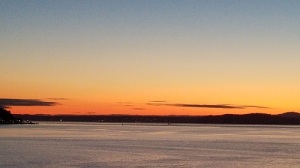 The final thing I realize is that I think it’s vital for me, at least, to disengage more often, more regularly, to take breaks from the obsessive checking and scrolling, to forget the world for a day. I think that I’m going to start doing this at least once a month, if not more often, just to try to maintain a little of that equilibrium I found out in Seattle.

I like that feeling of peace. I’m in no mood to lose it now.

One thought on “The Seattle Break”